Where the Worlds come together, the place of Tyrion is the place for the 2012 Cameo Caper to take place!

Before we even have the location set down, I have posted the cover to the start of my storyline for the caper. My latest page is both the cover to my issue 5 and the cover to my first special issue (the latter of which is the first caper issue).

So I guess this means I should say that I've officially entered the caper. Obviously, I am including my character of Tempore, but I'm also planning on using Eiderdown, Fractal, Sparkle, Astral, The Swimmer, and The Runner. The problem is that Sparkle and Astral's debut is issue 5, while The Swimmer isn't due to debut until July, and The Runner in August. I'll try to get the bios made and posted for everybody, however.

And Hogan, if you want me to send you the caper pages separate from the other storyline pages, let me know. I know you like to keep copies in case a comic goes off the web.
All the bad things in life only help you appreciate the good even more.
Top

You got some brass signing up for the Caper before even knowing where it will go, but... *salutes* ... we respect that

I'll get you official added to the list of participants once we actually get this year's invitation send out... until then, consider yourself the guest who turns up early in order to hog the best chair an get into the drinks and snacks early on!

Welcome to the Caper in advance!

... and thanks for the offer regarding the strips, but I usually make sure to get the copies as I keep up with the various comics during the Caper

Well, I'm not getting to the Caper location this month. This is a month where I get Tempore into the multiverse from his own. It's part of a four-part seies that leads up to the Caper, with the following two months after the four-parter being actually at the Caper location. By then all of the pertinent characters will be introduced, as well. But I might as well link to a couple character profiles as I have them at the moment, so other people can cameo them when they wan to for the caper: Tempore and Eiderdown.

I'll get other bios onlne when I can.
All the bad things in life only help you appreciate the good even more.
Top

I figured out who the potential murderer is from my side. He hasn't appeared in my comic yet, but may I present the Gunman: 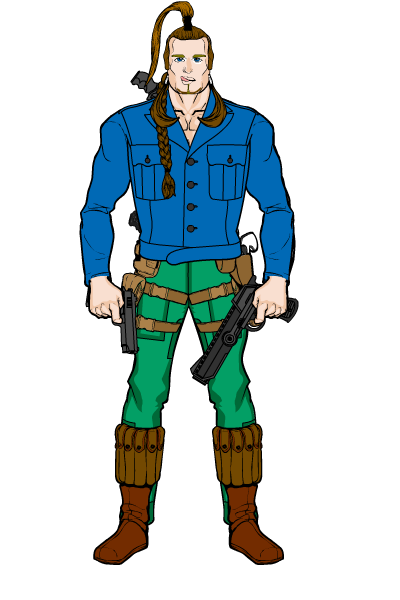 Real name: Tom Gunn (legally changed from Tom Bradford)
Height: 5'11"
Weight: 215 lbs
About: Tom is a gun for hire with a stellar reputation of dedication, and a low fee. He is known to love, not the sport, but the kill. Despite this, people are reluctant to hire him for one factor: he creeps them out. He will talk to his guns in a loving, sexual manner and it has been rightfully assumed that he treats them as such in private. In fact, this is why he changed his last name...
He may be a great shot, but he leaves himself open whenever he pauses to talk to/caress his gun. Having been disarmed a few times by his targets, he has also built his body up in case he ever needs to get is hands dirty, though he remains a poor hand-to-hand fighter and knows no martial arts.

The Gunman was somebody I concocted one day while thinking of a villain to enter into a villain contest the show The Cape was running (sadly, the site wouldn't let me register to even try to submit him). I kind of went back and forth on where he's from, but I do have a universe of origin for him, though he has a good amount of interdimensional contacts that knowing his home universe is not fully needed. His design obviously has a very 90s/Liefeldian aesthetic, which I felt appropriate for such a character.
All the bad things in life only help you appreciate the good even more.
Top

Say Ave, is this strip the official beginning for your part in the Caper (or just the prelude?).

Because if it is, then I'll need to be in a hurry to set up the Hub site(s)!

The cover to my involvement in the Caper has gone up today, so I am now much more officially in the Caper.

If anybody wants to work with me in the Caper, let me know. I'm open to ideas as to how things can go. The Gunman is already someone I've put in this thread as a villain, but I would like to see which comics I can interact with in order to face him, and possibly other obstacles.

Of course, it should be noted that my Tempore bit of the Caper involves him and Chaos interacting. For that, I would love if I could bounce my ideas off Joff, at least. Just note that I always prepare my pages as if they will be put in print, because that's what I want. If I interact with your comic and you don't want it in print, then I understand, but just know where I would always want to go. Anything I put up on IndyPlanet involving this Caper will be at minimal cost--the only ones earning money would be Ka-Blam, the printing company. Just wanted to mention, especially since I do intend on putting a copyright indicia and all that on this.

Also, a note on my update schedule: I update every weekday, and have tentatively thought it will be split with one day for Tempore, one day for Eiderdown and Fractal, one day for Sparkle and Astral, one day for the Swimmer and the Runner, and one day for all together (maybe not them interacting with each other, but just progressing their stories a bit all on one page). So if you want to intertwine your story with mine, you have an idea of the frequency of my updates.

EDIT: Hogan posted as I was getting this message out. As in: I was typing and my computer's battery went out, so I went to where I could plug it in, waited for the thing to actually do stuff, responded to a couple other messages, and then went through typing a freaking long post, all in which time Hogan mut have resonded.
All the bad things in life only help you appreciate the good even more.
Top

I was hoping to use your band of superhero's as an impetuous to some hijinks. Specifically, a mistaken identity or something leads to them briefly chasing Fox and Kitty just after they arrive in the nexus. Since both of them (Fox and Kitty) are grey furred could be something like they are looking for "The grey ones" or even just that they happened to come out of a blind alley at the wrong time.

What do you think?


-Fox and Kitty stumbling out of alley (Fox leaning on wall, Kitty looking around)
-Karabear(group) - “It’s The grey ones! Murderers!”
-Fox: What? We just got here! Kitty: That’s impossible. I’m three-laws compliant!
-Karabear - “Get them!”
The grey fox from over at Hey Fox.
Top

Hm. That sounds cool. I'd need to get that message to my characters, though. I'll try to think of a good way (unless omebody posits one). Mistaken identity is always fun.
All the bad things in life only help you appreciate the good even more.
Top
Post Reply
8 posts • Page 1 of 1